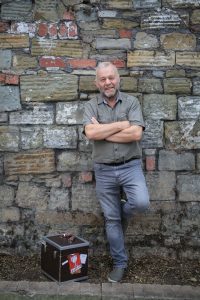 Steve Turner is known as a pioneer of highly sophisticated English concertina song accompaniments, stretching the boundaries of traditional forms, with one of the best voices in the business. He is a multi-instrumentalist, who also accompanies himself on the cittern, and also plays mandolin and banjo.

Steve began his career on the Manchester, UK folk scene at the end of the ‘60s, with the Geordie band “Canny Fettle”, touring with them for eight years and making two albums with them.

In 1979 he won the UK Melody Maker’s national “Stars of the 80s” competition, which persuaded him to turn professional, and for the next 12 years he toured solo, nationally and internationally, releasing four albums with Fellside Records during this period (Out Stack, Jigging One Now, Eclogue and Braiding).

After 13 years away from the folk scene he made a welcome return in 2004 performing in folk clubs and festivals, and in 2008 producing his 5th album, the highly acclaimed “Whirligig of Time” which featured UK luminaries Martin Carthy, Nancy Kerr and Miranda Sykes.

Since then he has released further albums, “Rim of the Wheel” and “Spirit of the Game”, and his latest much anticipated 8th album “Late Cut”, featuring Eliza Carthy, Martin Simpson and Sam Carter, was released in January 2019.

He has also been interviewed in leading articles in the UK folk magazines fRoots and Living Tradition.

In the F/Roots August/September 2014 edition Nancy Kerr in her “Rocket Launcher” interview when asked “what was the best gig you ever saw?” answered “… Steve Turner …”